Gilligan Funeral Home has been serving Cincinnati area families for years. We are honored to be a part of the rich history of this community and plan to be a part of it for many years to come.

More than a Century of Service in Cincinnati

Patrick Gilligan came to America from County Sligo, Ireland, settling in Cincinnati in 1857. He began a livery business, which he developed into P. Gilligan and Sons Undertakers and Embalmers with the help of his sons, Andrew and John.

The funeral home was one of the first in the area to offer embalming services. Patrick and Andrew died in 1905, leaving John J. Gilligan to operate the business with the help of his son, Harry J. Gilligan.

As his business grew, John purchased the first motorized funeral coach to operate in Cincinnati. He eventually changed the name of the business to John J. Gilligan and Son in 1919. 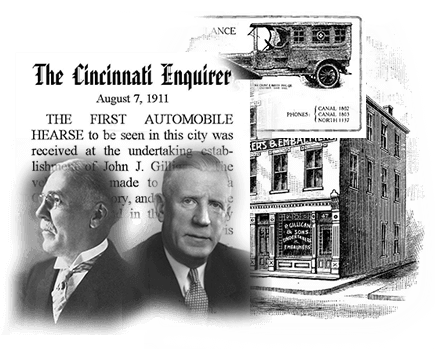 What Makes Us Different

Our History
Our Staff
What Makes Us Different
Testimonials
Contact Us

A year of daily grief support

Our support in your time of need does not end after the funeral services.  Enter your email below to receive a grief support message from us each day for a year.  You can unsubscribe at any time.